“You drew my tag!” This was a phrase I heard over and over from fellow hunters after finding out I had drawn Montana’s coveted unit 270 tag.  Every time I heard this, the pressure mounted. The unit is notorious for trophy mule deer and tough draw odds.  The odds are less than one percent and there are only 45 tags drawn out of roughly 6000 applicants.  10 are land owner tags, so that leaves a measly 35 tags for the general public.  Not only did I hold one of these measly 35, so did my 13 yr old son.  It felt a bit like possessing the golden ticket.

You would think I would be ecstatic, but I felt a little panic stricken.  I wanted to do the tag justice, and I desperately wanted to bow hunt it.  I had been bowhunting for nearly 4 years and had only one bow kill under my belt.  My confidence had been boosted by my success, but I was clearly still a novice.  More than confidence though, I had a taste for the knee knocking adrenaline that comes along with getting a shot.

The opportunity to shoot a nice mule deer buck with my bow was probably never going to be higher than with this tag.  But on the other hand, I knew with a rifle I would have more range and a longer season to hunt within.  What to do?

After much consideration (okay, not that much), the knee knocking adrenaline won out. When does a stay at home Mom ever get that rush, not from baking cookies I’ll tell you that!  I decided I would bow hunt the unit during the only weekend I had available and if I was not successful, I would rifle hunt the later, longer season.  Our 13 yr old son Jake had come to the same conclusion.  He had enjoyed great success his first hunting year and had bagged an antelope buck, white tail doe, white tail buck and a beautiful chocolate bear all with his rifle .  However, he had recently completed his bowhunter education course and was itching to try out his new skills.

Labor Day weekend found the whole family, plus our good friend Zach, all heading to the unit with two novice bow hunters hoping to do the coveted tag proud.  We had scouted the unit two previous weekends and had spotted many beautiful bucks, nearly all Pope & Young worthy.  My personal goal was to shoot a P&Y buck (not a lofty goal in this unit) and Jake’s was to shoot a 165+ buck.  What can I say, he is 13 and has confidence in spades…all his goals are lofty!

The first few days we put stalks on several different bucks, but our limited bow ranges kept us just out of reach of the best trophies.  Jake had his eye on an amazing, large bodied, big antlered brute he affectionately nick-named “DC” for double crown.  This particular buck sported double crowns on the ends of each side of his rack.  He was the biggest buck we had located thus far.  My husband Jerrod had guessed his score at 165+, so Jake was smitten and this was to be “his buck.”

The final day of our Labor Day hunt had arrived and brought fresh snow and cold weather. As we headed out that crisp morning, we had the intention of putting a stalk on D.C.  The plan was to orchestrate a gentle drive/push toward Jake, hopefully putting him in bow range.  I would act as a back-up shooter if he was out of Jake’s range or if we were separated and he came my direction instead.

I really wanted Jake to have success and as a Mom I would gladly step aside and let him have the opportunities at the bigger bucks because that is what was important to him.  I, on the other hand was anxious to get another adrenaline rush and bow kill to my name, regardless of antler size, that would be a bonus of course. Please keep all this in mind as I continue…

As we located D.C. along with several other nice bucks feeding in a draw, we started to strategize on how to go about getting Jake into a good position.  We were quietly planning our next step when the bucks began to move….quickly.  We were positioned on an old overgrown logging road, nestled nicely into a steep hillside. The small band of bucks was heading straight toward it. Stealthily and hastily we aimed to intercept the path of the bucks and ended up situated under them on the hillside.

Jake was giddy with excitement and my knees had started the anticipated shaking at the site of these gorgeous creatures.  We ranged D.C. and he was 15 yards out of Jake’s range.  My heart sank at the realization his opportunity was lost.   Being this was our last day to hunt, I couldn’t imagine letting this majestic buck slip through our fingers. Instinct took over and I took action.

I whispered to Jake to move over and I stepped in line with the buck.  As I drew my bow, a smaller buck fed his way right in front of him.  I let my bow down.  My heart felt like it was going to pound out of my chest and I was positive that the sound might spook the deer! I subconsciously was holding my breath, as if that would silence the loud thumping! The smaller buck finally stepped aside and graciously gave me a shot at his buddy.  I drew again and let my pin hover as I took aim.  I remember checking my level bubble for the steep uphill shot, and noticing that the shaking in my knees was graduating up my body and was starting in my hands….breathe….smack!  The bow went off effortlessly just like I had practiced.  I followed through strong and was still holding my position when the buck lunged forward.

I immediately thought of my son Jake and looked over at him.  I could see the disappointment on his face.  His mother just shot his beloved D.C. right out from under him.  I couldn’t stop from tearing up, between the adrenaline, the anticipation and the look on my son’s face it was too much to process.  As the water works poured, I started apologizing to my son for shooting “his deer.”  Halfway through my blubbering apology I heard Zach exclaim “He’s down!”  That snapped me out of my emotional breakdown and I started to smile.

My son Jake was amazing and although extremely disappointed he was congratulating and hugging me, all the while telling me he was proud.  I too was proud, of him and the maturity he showed.  At that moment, I sent a prayer up that when Jake got his buck; it would be bigger and better than D.C. 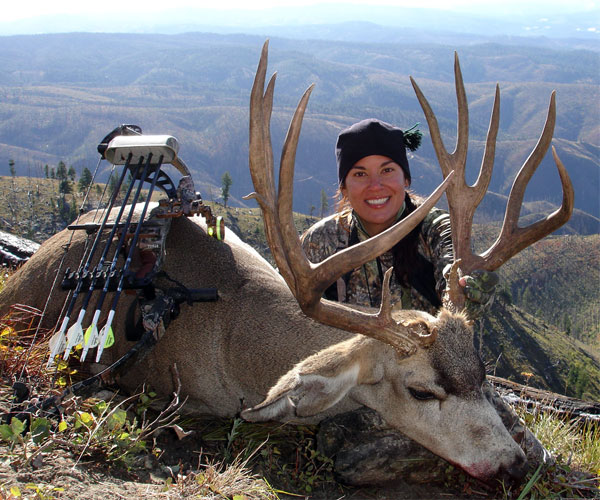 The shot was perfect and he only went a few dozen yards.  His antlers were massive and even more impressive than we initially thought.  To be perfectly honest, I was so elated at killing my first deer with a bow, and the fact I had made a great shot, the score of his antlers was secondary to me.  However, I was fairly certain I had did the 270 tag justice with the buck’s green gross score being a mind blowing 195! After the required drying period, the official net score was 192 2/8.

Archery is so much about opportunity, and those moments are few and far between.  As Jake becomes a seasoned archer, he will understand this more and more.  I did not want to take that moment from him, but I was glad he was there to share mine.  Besides, his opportunity was to come during the rifle season.

God works in mysterious way.  That summer, while we were scouting the unit, Jake had taken a picture of a magnificent wide spread buck in the velvet.  He had blown the photo up and tacked it to his wall as his “inspiration” photo.  We had not seen this particular buck during our bow hunt, therefore he was put out of our minds.

On the first day of the rifle hunt in unit 270, within the first 20 minutes of the hunt, we came across a nice bedded buck at 150 yards.  Jake passed him up, confident that the day held more promising prospects.  We all hoped so, as this buck seemed to be a slam dunk…and close to the pick up!  He was respectable at a rough score guess of 160 or so.

The family hiked all day and we encountered a few smaller bucks, but were beginning to think we had passed on the best opportunity, when Jerrod spotted a nice buck.  We put a stalk on him and when Jake had a clean broadside 200 yard shot, he took it and he took that buck down!  The buck died only a few hundred yards from where I had killed my buck earlier that fall.  He was the exact same buck Jake had on his wall all summer long! He had a nearly 30” outside spread and rough score of 182.  He was amazing.  Jake was so proud and no longer disappointed that he was not able to shoot “D.C.”  The ironic part is that although Jake’s buck was not “bigger” in score, it was certainly wider and appeared more impressive in size.  So, my prayer was answered and Jake got a “bigger and better” buck.

I am so thankful for my amazing husband Jerrod, who has willingly and gladly put so many of his hunting priorities aside to ensure myself and our son success in our own right.  He truly loves the thrill of the hunt, and strives for his family to love it too.  I also need to acknowledge that Jake’s little brother, our youngest son Luke was present during both these hunts and kills.  He is waiting for his opportunity to hunt (this fall will be his first year) and with a happy heart has followed the rest of the family around, putting in all the hard work, with none of the glory. I will never forget these hunts, and I am pretty sure that not very many people have been able to have their entire family present for two amazing experiences like that.  Our family is small with only 4 of us, but I have say…the family that hunts together, stays together! 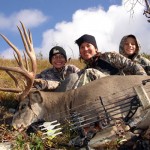 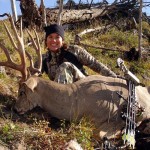 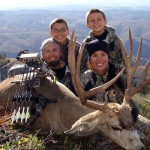 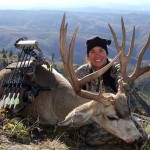 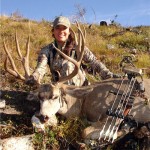 2 Responses to A Family Affair