First I would like to thank my grandpa and my father for this amazing opportunity.

For three weeks my dad had his eye on this buck for me. He would go out every morning and evening to watch him and try to pattern the buck. We knew he was very big and this would be a rare chance for me, but my chance was much greater considering the extra two days that that kids under the age of fifteen get inMontana. I woke up early, grabbed my hunting stuff and we headed out to the area we were going to hunt the first morning.  We hiked up the river about a half mile and my dad carried me on his back through a couple sections of the river. When we got to our spot we had to sit and wait for him to exit the grain field.  It finally got light and about 20 minutes later the perfect buck was coming my way.  He stopped and turned broad side.  Dad ranged him at 120 yards and I prepared for the shot.  We were in a small patch of aspen trees and I was trying to use an aspen for a steady rest but I couldn’t get steady so dad told me not to shoot.  While moving around trying to find a better rest the buck saw our movement and started heading a different direction.  We snuck up on him to try it again, this time we were about 180 yards away and he stopped behind a bunch of branches. I looked at my dad and said, “I don’t feel confident taking this shot.”  We came back that night but we did not see the buck.

The next morning we were going to try and sneak to edge of the grain field before daylight and hopefully catch him before he could head out his usual direction.  As the grain field lit, he stood there quartering away.  I set up on my new shooting sticks and told my dad I was ready.  Dad ranged the buck at 317 yards and said “he’s too far, don’t take the shot”.  I said I’m perfectly steady and I can make this shot, but dad said “no” were not going to risk a shot that far and I watched the buck walk away.  It’s now Friday evening and my last opportunity at this buck before the general season opens for everyone.  My dad calls from work and says he is not going to be able to take me out.  He says “ask grandpa if he can take you.”   I call him and he jumps at the chance.  We loaded up and headed out.  We drove out and set up where the buck usually headed for the grain field.   We didn’t see anything but we decided to stay for a while longer.   I wanted every chance I could to get that deer.  After what seemed like an eternity, I said “grandpa lets go see if he is already in the grain field”.   As we approached the field he was way down at the other end about 600 yards away.  Grandpa got me out of the truck and set me up in the tall grass and then got in his truck and drove away.  I waited and waited but the deer got further and further. My luck was running out when a small coyote jumped out and started chasing the buck towards me.  Twenty minutes later the buck was 160 yards away and I took the shot.  When I looked up and didn’t see my deer I was heart broken.

I looked toward where grandpa was parked and could hear him yelling “GO GET HIM!” I replied, “But I missed, are we going to go follow him?” He said, “No you got him!”

I ran out into the field and sure enough there was my buck. All the more special I was using a gun that my grandpa made for my great grandma in 1962 and that my grandpa was there to share that special moment with me, making it the perfect buck. 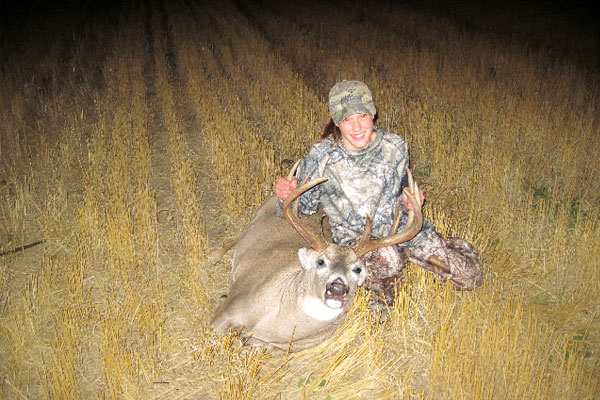 One Response to The Perfect Buck