For the past two months I have been hunting deer, which is another article in itself. This is the last full week of rifle season and I’ve been hunting whitetails out of tree stands with my bow since archery season ended. I’ve passed up a few two points and small three point bucks that I like to call “Mike & Ike’s”.  A few nights ago I drew my bow on a nice four point. I was sitting in the midst of a snow storm and while I remembered to keep the snow dusted off my bow, sight and arrow when I drew my bow back my vision was blocked by a peep sight that was full of snow. At full draw I pulled my head back and blew in an effort to clear the peep, but this extra effort cost me the necessary time I needed to capitalize on the opportunity. I watched as the four point walk out of range. Attempting to slow him down by using my grunt tube was to no avail, it too had fallen victim to the snow!

On this particular morning, I considered for a second not heading out early to get into the stand as the temperature was only 5°. Never wanting to miss an opportunity, I dressed accordingly, stuffed my pockets full of hand warmers and away I went. I settled in for the long morning with my bow perched on its hanger and safety harness secured as I burrowed down into my Warmbag. It was a clear morning, the sky full of stars, the air crisp and the lack of wind a welcomed change.  As Mother Nature slowly lit up
the landscape, I could see a nice tall four point buck in the neighbors field possibly coming my direction.  A doe and fawn were feeding below me and I caught the movement of another buck chasing some does around slightly behind me about a hundred yards or so. I could tell he was a least a four point with nice eye guards.  I couldn’t get a good look at him because he was going crazy over the does and kept running in and out of the thick brush. All of a sudden he put his nose to the ground and started in my direction at a steady pace. Oh god! My heart started pounding; I could hear it in my ears.  My excitement and nerves were on the verge ofgetting the best of me.  This is when I had to say to myself “get your shit together girl; it’s just a buck you can do this.” As he walked behind a tree I drew my Hoyt back. The buck stepped out into a shooting lane at 33 yards and paused to check out the ladies. Smack! The shot hit hard and it looked good as I followed him with my binos through the trees. I didn’t see or hear him fall but the moment the arrow cleared my string
I knew I had my buck! I texted my husband, Jesse, and told him I just shot a nice buck and hunkered down into my Warmbag to wait. Deer continued to pass all around me while I mulled over the recent events in my mind. Twenty minutes later I gathered up my gear and hiked back to the truck to warm up. It wasn’t long before my eagerness got the best of me and I walked out to where the buck was last seen. His trail was easy enough to find by the fresh tracks in the snow but I was disheartened by the lack of blood on the ground. Remaining confident in my shot I decided to go back and wait for Jesse’s assistance not
willing to take the risk of blowing the buck out just in case it wasn’t the shot I thought I had made.

A few hours later Jesse and I began following the now cold trail, still seeing very little blood even about 100 yards into it. The tracks were easy enough to follow in the snow yet we took care where they mixed in with other deer tracks. Taking it slow we found where the buck had crossed a creek into some thick brush. Once across the water and ice we took a high vantage point and glassed the thick bottom.  It was a suspicious acting magpie that caught our attention. Jesse went back to where the buck crossed the creek to take up the trail again while I held my position up high watching in case the buck made an escape but these precautions were not needed. Minutes later Jesse reappeared giving me the thumbs up.  We all know that feeling of relief and excitement when you find your game.  I did a little jumping up and down, gave Jesse a quick hug and a high five then off we went to
view the prize. What a beautiful buck! 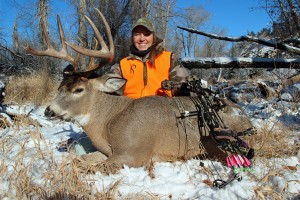 Early on in Montana’s archery season I harvested my antelope and elk leaving me with plenty of time to focus solely on deer hunting. It was the first time I’ve ever passed up bucks with the notion that I had the next two months to get a buck on the ground. I am not a trophy hunter by any means, I just didn’t want the season to be over so I thought I would take my time and be a little more selective this year. Thankfully my perseverance paid off with the harvest of this handsome whitetail buck.