Fourteen years ago in scheduling my wedding date, I made sure that it didn’t collide with any hunting seasons. A few years later Montana moved the opening of antelope season up two weeks, landing it right on our anniversary. At the time I was disheartened knowing that it would put a damper on “our day,” not realizing in the near future I’d look forward to our anniversary-antelope hunt.

Traditionally this trip coincides with our hunting partner’s birthday and I look forward to the three amigos traveling from one corner of our vast state to the other. This year was a little different; unfortunately JT had a conflict and could not attend. Jesse and I now had a romantic hunting weekend to ourselves crawling through prickly pear on the dusty prairies of Montana, camping under the stars while hunting antelope. Okay maybe romantic isn’t the best way to describe it, but I look forward to our trip and it continually provides me
with great times resulting in unsurpassed memories. 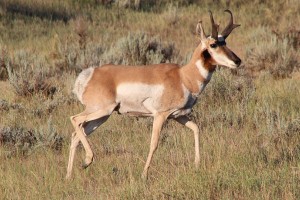 My gear was packed and anticipation was building days before, knowing that I had to work throughout the fifteenth. Jesse picked me up from work on his way out of town with an unknown destination in front of us. As evening closed in thunderstorms rolled across the prairie making the thought of spending the night in an overpriced, seedy hotel, in a small town seem more appealing than spending the night under the stars in the midst of the storm. We checked into our room and put together our plan for the following day over a glass of wine. 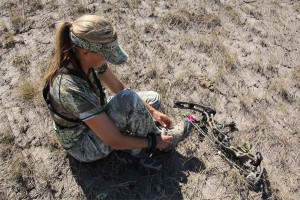 It was dark when we headed out but getting up was easy, I was ready to find an antelope to stalk. We covered a lot of ground not seeing many bucks but as the sun came over the sagebrush I found myself in-between a great buck and his does at 34 yards, he gave me the stare down before retreating never presenting me with a good shot. By the afternoon I had crawled in on a smoker buck in his bed at 50 yards but he busted me leaving me instead to hunt for my shoes and in search of the cactus that were imbedded in my feet.

Day one was history, Jesse and I lay in the back of the
truck sipping another glass of wine looking up at the incredible display of
stars, discussing the day and what was on our table for the morning. At sunrise
we located a lone buck on public land feeding up a creek bottom so I grabbed my
gear, slid under the fence and moved across the field as fast I could get away
with. Using the brush along the creek for cover, I worked my way along, lining
myself up for a collision course with the feeding buck. Due to the brush and
his intent on eating, it was a fast and easy stalk making it easy for me to get
within shooting range.  My plan was coming together and while he ate I was able to obtain his range and settle my pin on him in an attempted harvest. It worked! I made a great shot through the lungs and I continued to follow his movements all along through my bino’s marking where he lay and making sure he was down for good. Mulling my experience over, I walked back in search of Jesse so I could replay the hunt back to him in detail. We compiled our gear for photos and field dressing and headed out for the retrieval. Both of
us worked fast at getting him prepped, wanting the job finished quickly before the temperatures rose and to give Jesse more hunting time. 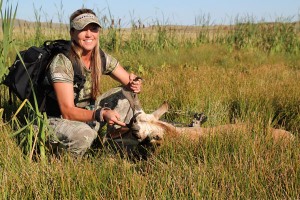 As we wound our way home through the back roads we saw a
few nice antelope on public land but one buck in particular caught both of our
attention. I knew then and there that this would be the buck that my husband
would obsess about and that he would be back to hunt on his next day off. 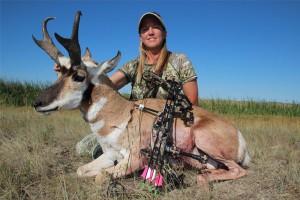