What’s Wrong With Your Face?

In Montana the winters are entirely too long and this year there has been no exceptions to this rule. It’s the first part of May and there is plenty of snow in the mountains and foothills with continued storms blowing their way across our state at will. My husband and I have been cooped up for too long.  Suffering from cabin fever we loaded the truck with equipment to handle any opportunity and without a specific direction or species in mind we hit the road with all of our newly purchased tags and all the goods needed for a great day outside.

On our way out of town the mountains were socked in with low clouds and getting pounded with snow. Once we made it to the other side of mountains we reveled in the patches of sunshine ahead of us, improving our attitudes and giving us a direction. Without wasting time we scoured our usual spots for gophers to use as target practice, working through the bad habits we had developed from not wielding our guns throughout winter. It didn’t take long for another storm to roll in, putting an end to the rodent shooting. We decided not to let the weather dictate our day and continued on with our Sunday drive, finding ourselves in the mountains looking for bears.

With the newly emerging green grass, it didn’t take long to spot a good size bear feeding along a rocky ledge. He was stocky with a chocolate coat across his body and a grayish face giving him an aged look. Taking the wind into account and moving fast, we worked our way up the opposite side of the canyon, locating a position with an unobstructed view. I found a stump that gave me the angle and rest I needed for an across the canyon shot. I leveled the gun and located the bear in the scope, now it was a waiting game as he rummaged along a rockslide; I remained steady looking for a clear broadside shot. Tracking his progress as he moved through the broken timber, the bear stalled in a small opening that was lit by the sun. Figuring out the yardage I made my adjustments, then took three deep breaths letting the third out half way and started to squeeze the trigger.  The shot echoed up the tight canyon and sent the bear rolling partially down the hill until he got his feet under him and disappeared into the timber below. Once I got my adrenalized legs to work we waded across a creek and climbed the opposite side of the canyon went to retrieve the boar. We found him in a bunch of down fall and upon examination realized the gray face we thought bear originally had was from having no hair on his face at all! The boar I had harvested showed the results of den mites on his face and front legs, truly making my bear quite homely. 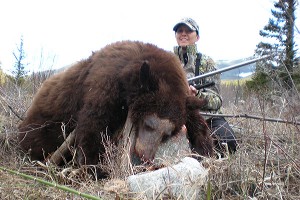 Nevertheless it was a fun and successful day. Although I am done bear hunting for myself, I’m still heading out to the mountains with my husband who happens to be a more experienced and discerning bear hunter.