Can I have a chance please? 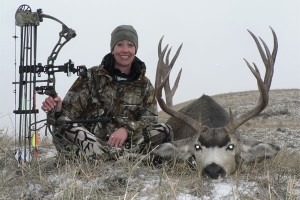 We left Friday after work for our favorite public mule deer hunting spot, full of anticipation for the weekend hunt. This was my second year bow hunting and I loved to get out and was eager to learn.  I was lucky enough to get a small whitetail buck the year before but I also had lots of failed attempts, blind hunting and spot and stock. I had gone out with friends many times that year and was reminded every time that it takes lots of attempts before you might even have a chance to draw your bow! So needless to say I was excited to get out and hopefully have a chance to practice those skills again.  I was learning something new every time!

Up early the next morning we made our way to one of our spotting places and we were ready at daybreak.  We did spot some bucks up and feeding but we wanted to keep looking.  A bit later we spotted a group of does feeding and I was able to successfully sneak in on one and fill my doe tag!  It is so exhilarating to get so close to an animal and watch your arrow hit its mark.  I was so excited; I might have even done a bit of a dance before getting it cleaned. Quite a bit of satisfaction in it all! Our afternoon hunt did not turn up anything that we were able to get in on, although we were seeing some animals.

The next morning under cold and cloudy skies, we went to a different location to check it out.  Again we saw some bucks but no opportunities. By late morning it was still only 25 degrees and it had started to snow lightly.  All of a sudden, in the same spot that I had been looking, I spotted a buck that looked like a nice 4×4 from a distance, one I was fairly certain that I had not seen before. My whispers raised an octave when announcing my find, as I started to gather and ready my things. I had decided in my mind the second I saw him that I was going to go after him, well at least try. Thank goodness the level headed, more experienced hunter with me insisted I slow down and make a plan.  It did appear that he was hunkered down due to the weather, but I wanted to hurry, I did not want to miss the chance.  He was bedded down by a small cottonwood tree at the base of a 5-6 foot bank facing our direction. While watching him, we checked the wind and the lay of the landscape and came up with a plan.

There was a meadow directly in front of the buck but it appeared to be too far across with no available cover to attempt that way.  The best approach was to back out and go clear around the big knob to the south east with the wind in our faces.  After checking landmarks around the buck, we took off in that direction.  While we made our way, running through my head were thoughts of concern; was I going to be able to locate him from a different vantage point and how close I was going to be able to get before he bolted?  No matter how it played out, I was looking forward to the experience and to see just how close I could get.

After coming around the knob we stopped to glass and regroup, being sure that we had not been heard or seen by other eyes. We found the landmark that I was looking for and double checked the wind…still in my face.  The next part of the stock was going to be more challenging…there was an open meadow which now I had to cross.   It had nothing more than a few small bushes and some grass for cover.  It was about 100 yards to the cottonwood tree and bank edge where I had last seen the bedded buck.  The ground was covered with about 1-2 inches of crusty snow and extremely noisy when walking.  Leaving my pack there and taking my last words of advice and encouragement with me, I picked a line and as silently as possible crept forward.  I made it about 30 yards, at that point it seemed obvious that to get any closer without being heard I was going to have to shed the boots.  Leaving the boots behind, I continued forward slowly, eyes fixed alternately between the spot that I thought he was at and the ground for my next step; hoping the entire time that the winds light gusts were not going to change directions.  Although much stealthier now, the heat from my feet was making the snow melt enough to stick to my wool socks and I had to shake it off every couple of steps as to not lose my footing.  It was like walking in gumbo!  Closer I crept…now pausing to range the target tree that I was hoping he was still bedded by.  My heart was racing; I had actually got to within 40 yards of the tree!  Not being exactly sure what to do next, I remembered one of the recent hunting stories I had heard where a friend had described drawing his bow on his target before seeing him.  Although a bit panicked because I could not see the buck and sure that he was gone I drew back and continued to creep forward.  My mind was screaming…this is a silly exercise in futility…he is gone!  Until I saw the tips of his rack turning in the grass!  I could not believe it, he was still there!  He stood up from his bed and turned perfectly broadside to look at me.  It seemed like I had a ton of time, I found my anchor and settled my 35 yard pin behind his shoulder.  I executed the shot just like I had done a thousand times at the block target, and an instant later my arrow found its mark.  I heard that unmistakable sound when it hit and the buck jumped, bucked and spun…heading around the front of the knob that we had just come around!  To my surprise, 20 yards to the left, another buck jumped up and ran off across the meadow…and he was a nice looking deer too. My attention back on the buck I had shot, I could see my arrow hanging and flopping from where I had hit him.  A flash of panic crossed my mind, worried that I had not gotten enough penetration, but I had also seen a lot of blood!  Then he seemed to stumble in his haste to escape as he disappeared out of sight.  I heard congratulation from behind me, “that was a good shot!”  I was really not sure what to think at that point, I was still in shock.

I made my way back to my boots and collected my pack.  Giving him some time, we slowly made our way back around the back side of the knob until we came out the other end.  Hoping to maybe see him in the bino’s from that end before going back to pick up the blood trail.  We started looking and it was not long before we spotted what appeared to be his hind end all piled up.  Then I felt like I could start celebrating!  I could not believe that it had just happened; I snuck in and shot that buck!  I was so excited!  When we finally came up on him I was initially shocked and fascinated by the lung coming out of the entry hole. But then I picked up his head and started counting the points! A 6×7 heavy mulie!  No way… when I first saw him I had thought maybe a nice 4×4! I had no idea.  Surprised too, my friend was kicking himself for underestimating its size.  I was so pumped up that I could not stop stumbling over my words and the grins hoot and hollers, and high five’s seemed to never end!

We managed to wrangle that big buck around for pictures and started to work on capping it out and packing it to the truck.  The whole time I just kept shaking my head in disbelief when I looked at him….no way was he that big!  He had a green score of 178 5/8. What an experience; I’m definitely hooked on bow hunting now and can’t wait to get out there again.  Regardless of what I might have the opportunity to harvest, just being out there doing it is worth it, because I guess you never know!