Secrets of Hunting the Grey Ghosts

Regal, elusive, and petite describe the Coues Whitetail Deer, while rugged, rocky and steep portrays their home. They are often called the Grey Ghost of the Desert and for a good reason. They can appear to crawl out from under a rock on a hillside you glassed for hours, only to again disappear so quickly without a trace.

This mid-November hunt in New Mexico was brutally cold and windy. My companions on this hunt were my husband, Ralph, and my youngest son, Toby, only 10. We have learned over the many years of hunting these incredible creatures, that glassing from a high vantage point is critical. So we spent hours upon hours glassing from one ridge to another. We were seeing a lot of deer, but not the mature buck I was looking for. I had harvested a respectable Coues’ deer the prior year, so I had set my goal a little higher this year. As we decided to move once again to another ridge, we suddenly bumped a couple of bucks. One of them was definitely what I was looking for. I tried to hurry and set up for a shot, but he never presented one as he ran through the thick cover. We rushed over to the edge of the ridge where they had gone and started glassing. We spotted the smaller buck he was with, but could not locate the large one. We watched as the smaller buck bedded down way across the canyon and we continued to glass for about 2 more hours. Since we knew that Coues’ Deer are habitual, we decided to back out and come back the next morning to try to locate him again.

The next morning was just as cold and windy, but knowing that buck was in there made it less noticeable. We made our way back to the same ridge slowly, glassing along the way. Right away we spotted the same smaller buck along with another small 2×2. We glassed and waited. Suddenly, the big buck stood up from behind a cedar tree. He began to feed around along with the other 2 bucks. I set up to take my first shot at 400 yards. This shot anchored him as he went down under a nearby Juniper. We moved up closer and decided I need to make a follow-up shot. At 257 yards, I made the second and final shot.
We hiked over to the buck and we were all pleasantly surprised at his beauty. Now the work would begin. It was time to prepare the meat to travel home to the dinner table. 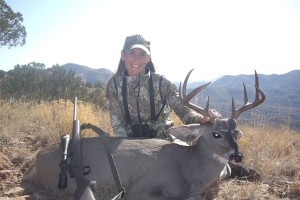 If you need advice and can’t find a local huntress to converse with, feel free to get a hold of me at marcy@gilaoutdoor.com. Thanks for contributing Marcy!