Here Lizard, Lizard – my memorable afternoon as an Alligator Hunter

I’m not sure when my quest to hunt an alligator started but I do know about five years ago while at the SCI show in Reno I started looking for a hunt. Of course the Safari Club International vendor pricing was a touch out of my league, so I kept up the pursuit in finding the right hunt for us. Those large lizards fascinate me and anytime a hunting show came on featuring the creatures I would yell to Jesse that they are hunting gators, come watch! And yes, I am addicted to “Swamp People” even if some of it is “for the show” it continues to sucks me in every time. All of this led to my husband’s knowledge of these two things, she wants to shoot a gator with her bow and she’s not going to “let it go” until she gets to. During his sales meeting this year he found a lead on a place in Florida where a hunting opportunity existed, when I got the word on this “we” immediately called. That was all it took, the hunt was set up and we were going to manage to fit in a bit of Florida vacation too. 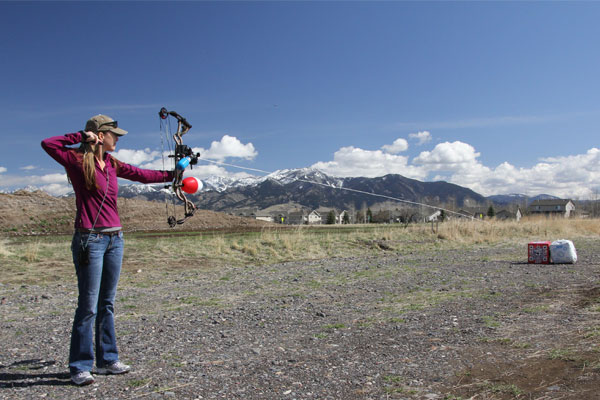 The weeks prior where designated to setting up our bows, practicing with the fish arrow and the broad heads making sure we were on the mark. In addition to that seemingly like most of my stories begin, three weeks before we were scheduled to leave I managed to blow my knee out “Joey style”. I hurriedly made all the doctor visits hoping there would be a quick fix learning that I had a destroyed ACL and a torn meniscus all to which the Doctor said I had to have surgery. I voiced my concerns stating that I was heading out in 3 weeks to do my hunt and could he make my knee work for me with a brace of some kind. Fortunately he’d taken a course in professionalism and knew how bad it would be for him to laugh directly in my face, so we scheduled the surgery at his earliest convenience. For a few days there we were full of doom and gloom thinking we would have to cancel our Florida trip, but we decided to wait until after the surgery to see how I handled it and what the physical therapist had to say about our timeline. She thought it was a possibility giving me the incentive to push myself harder to recover as much as I could, in the amount of time I had.

My hard work paid off and before I knew it we were on our flight meeting up with our hunting buddy in Minneapolis and sailing in air to our sunny hunting destination. We found our motel and a great place to eat where the boys gorged themselves on shrimp and I on Mahi Mahi by then we were exhausted and retired to our rooms for the evening.  Our first day was supposed to be a beach day; we called our hunting guide to check in with him to get the specifics for our following days hunt, and instead he told us to head his way in a few hours. Oh god, my excitement was amped up a notch with that announcement and I decided to forego the beach to gear up for the afternoon hunt.

We made it to our guide’s house with a few missed turns along the way, Justin’s place was the epitome of any hunting mans castle. There was a huge shop, swamp buggies, air boats, Polaris Rangers, trucks, hunting hounds, animal cleaning area, a walk in cooler, an ice machine full of beer and plenty of land to shoot on. I had a feeling this was going to be good! We stopped for licenses on our way to the ranch peppering our guide full of questions regarding the surrounding area and the particulars of hunting alligator. 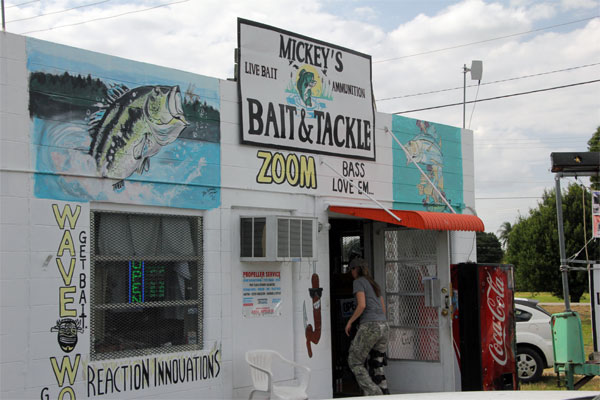 Since our arrival to Florida we’d been trying to spot an alligator, of which once you figure out where to look and what you are looking for you begin to realize they are everywhere. Justin flew by quite a few pointing them out as the dust rolled out behind us in the rear view mirror, only stopping to look at a few worthy suspects of large enough proportions. Truly it wasn’t long before we spotted just the eyes of an alligator sitting up in the water in a small watering canal out about 80 yards, that Justin seemed to think might be a good one and whoever was up needed to put a move on gearing up and putting the sneak on it. We decided Jesse was going to go first because I was still too excited and really wanted to know how this whole hunting situation was going to go down. We were in an orange orchard and we snuck down the tree line and peeked over the edge into the water, seeing the alligator laying there in the bottom. Upon some discussion of shot placement the first shot was made. It was a good shot but needed to be a bit forward because the kill area is about the size of a quarter. The second shot was even better as the blood started rolling out, a hook was thrown out to try to pull him in at which point the gator started thrashing and rolling himself up in the line we got him positioned for the final shot and he was drug up on land. A few photos later Justin was eager to get on to the next lizard there wasn’t time to dally, we had business to do. 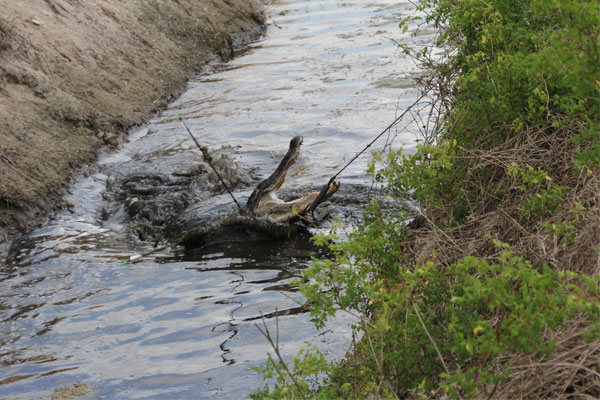 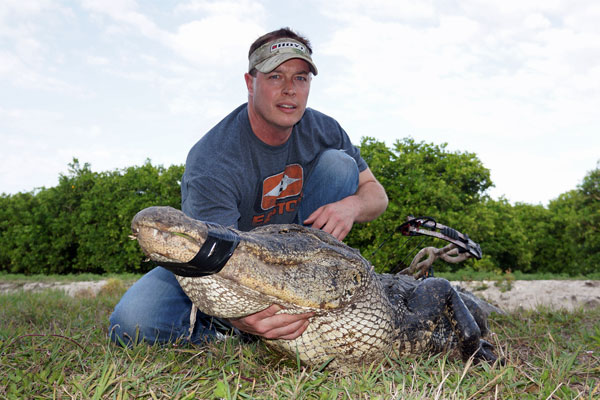 After witnessing the first harvest of an alligator I prepared myself to take the next opportunity. While racing down the road Justin got a call from the ranch manager telling him that they had spotted what looked like a large gator in a small pond where one had taken down a calf the week prior. We headed that direction, arriving only to see the tail of one slipping into the water as we drove up.  We got out and walked around the pond checking the tracks that looked fairly large according to our guide. 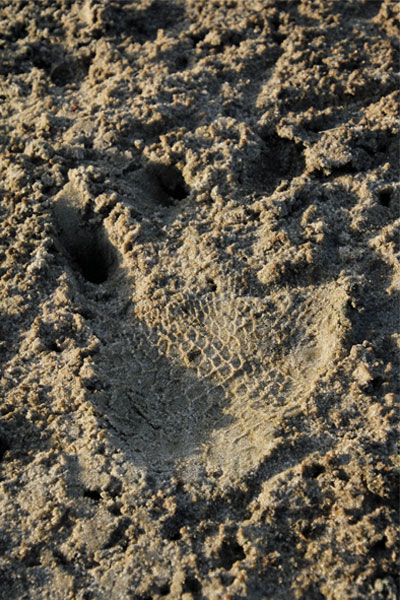 Again, the gear was hurriedly rallied and my fish arrow was on, this was going to turn out slightly different than the last alligator because the creature was underwater and we couldn’t visibly be seen. Justin hauled out a large weighted treble hook attached to a rope and threw it across the pond several times dragging it back towards him trying to snag the gator. The rope and hook are used to bring the gator to the surface of the water, bringing it in close improving the shot placement. Justin hooked it and pulled the reptile to the surface producing a large gator prompting me to get myself into position to get a fish arrow into the side so a buoy was attached to it in case it got off the hook. I lodged the fish arrow into its side and he thrashed around so much he broke that off and managed to also remove the treble hook from the other side as we watched him disappear into the water. Yet again Justin ran the treble hook across the pond trying to snag the alligator in minutes the gator was on the hook and within 5 yards when I lodged the first broad head into the base of his skull hitting him just a tad back. Like I mentioned earlier the kill spot on these tough creatures is only about the size of a quarter. This scenario happened yet another time where the gator took to rolling, breaking the arrow and hook off. In the meantime the rancher and another guy showed up also trying to snag the gator, Justin came up with my gator as I got yet another two broad heads into him while the rancher snagged another equally nice gator that Jason was in the process of successfully harvesting. There was a lot of action going on there for a while; I was relieved to have the reinforcement of the two extra men helping us. 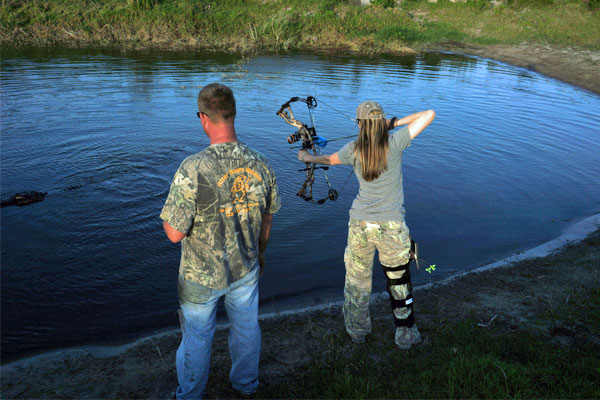 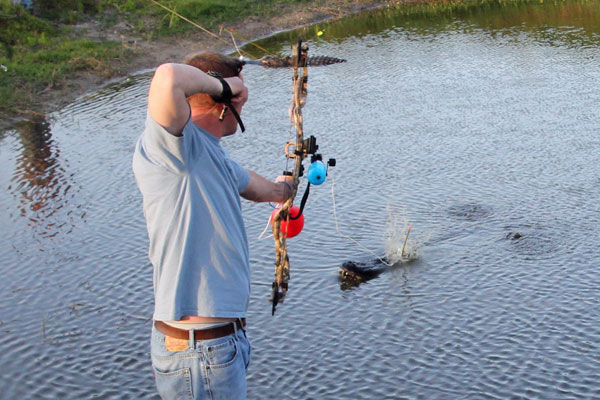 My alligator was dead, but like most reptiles they continue to move so Justin jumped on him taped his mouth shut and handed me a knife to sever the spinal cord in the back of the skull. As I’m pounding the back of the knife handle driving it as deep as I can into the creature (I’m thinking to myself, this is crazy). Jason was on the other side of the pond finishing off his gator. Three guys had to drag mine out of the water and up on shore where we could get a better look at it. Wow, both Jason and I landed nice gators which lead to the usual banter of whose was bigger and all the rest of the smart remarks that follow up a good day of hunting with us. The sun was beginning to set and we needed to get our photos taken while the lighting was still decent. This whole hunt was incredible and I was able to share it with some of my favorite people. The day ended at Justin’s shop taking more photos and measuring them out over a few celebratory Corona’s. 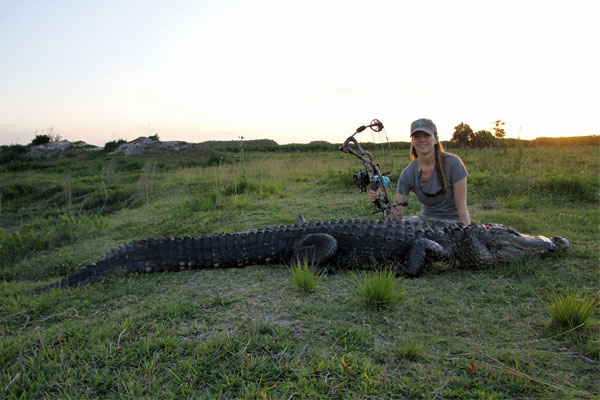 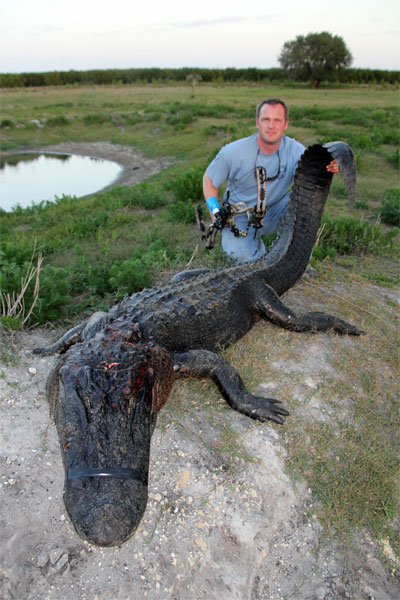 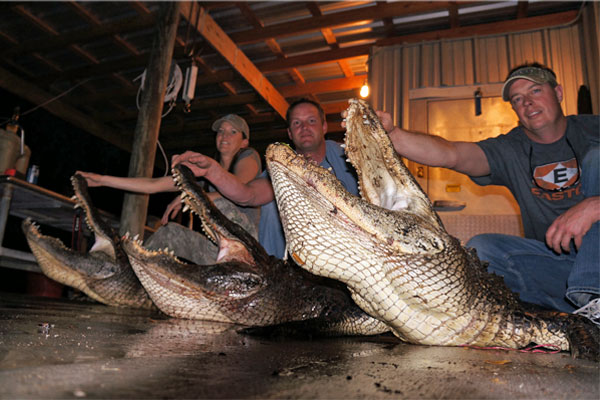 3 Responses to Here Lizard, Lizard – my memorable afternoon as an Alligator Hunter